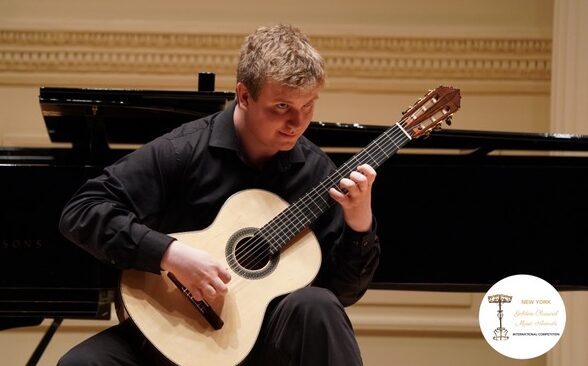 Thatcher Harrison is a guitarist and a composer. As a guitarist, he plays everything from classical guitar to jazz guitar, to fingerstyle guitar, to popular/rock guitar. As a composer, he deftly combines influences from many genres of music to create pieces that satisfy both the heart and the mind.

As a composer, Thatcher Harrison specializes in what he calls “classical fusion” composition: pieces based in classical composition and performance techniques, but with influences from jazz music, rock music, fingerstyle guitar music, film score music, and world music. While Thatcher is best known for his compositions for solo guitar, he also loves to compose for different instruments and ensembles, and he has completed several commissions for soloists and ensembles alike.

As a performer, Thatcher Harrison chooses to perform unconventional and daring programs, oftentimes consisting primarily of his own compositions. Fresh off his concert at the 2021 Boston Guitarfest, Thatcher’s upcoming concert season will see him expand into the international scene, as he will perform concerts for the Pleven Guitar Festival in Bulgaria, the Twents Gitaarfestival in the Netherlands, and the Domaine Forget International Music Festival in Canada. In years past, Thatcher has performed at such notable concert halls as Weill Recital Hall at Carnegie Hall, Jordan Hall, Symphony Hall, the Baryshnikov Arts Center, and RiverCenter for the Performing Arts. Thatcher also performed on Episode #376 of NPR’s From The Top in 2019.

Thatcher is currently studying for his Bachelor of Music degree in Classical Guitar Performance at New England Conservatory with Eliot Fisk and Jérôme Mouffe, and he also studies privately with flamenco virtuoso Grisha Goryachev and classical guitar virtuoso Scott Borg. Prior to attending NEC, Thatcher studied with William Riley.