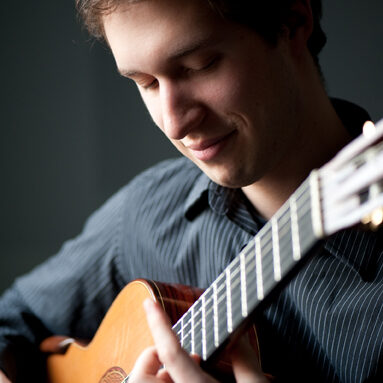 A virtuoso guitarist from Belgium, Jérôme has dazzled international audiences with his passionate and spontaneous playing. Jérôme has toured throughout the United States and Western Europe as a soloist and chamber musician.

Recent performances include recitals for the Omni Concert Series in San Francisco, the New York Classical Guitar Society Second Sunday Series, the Guitar Society of Northeastern Pennsylvania, the MIT Little Kresge auditorium, and the International Brussels Guitar Festival, among others. In November 2009, Jerome was invited to perform at the Agustin Barrios Mangore Festival in Brussels, where he shared the stage with his mentor, Eliot Fisk. In March 2011, he performed Rodrigo’s celebrated Concierto de Aranjuez with the Orquesta Filarmónica de Sonora conducted by Hector Reyes, in Mexico. Jerome has released his debut CD—Capriccio— on the VGo Recordings label in 2009.

In May 2012, Jerome graduated with a Doctor of Musical Arts degree from the New England Conservatory of Boston. His doctoral dissertation analyzes how collaboration between composer and soloist achieved an optimization of the guitar’s capabilities in Robert Beaser’s Guitar Concerto (2009). Jerome was invited to teach masterclasses or lecture at various universities including San Jose State University (CA), University of Wisconsin Milwaukee (WI), Acadia University (Canada), Dalhousie University (Canada), University of Sonora (Mexico), and Music Conservatopia.

Jerome earned his Master of Music degree at 20 at the Conservatoire Royal de Bruxelles, and a Postgraduate Diploma at the Universität Mozarteum Salzburg.

Find out more about this concert on the Hingham Library website.