We are proud to welcome Adam Del Monte to the BCGS stage to kick off the 2022–23 Artist Series.

One of the leading flamenco and classical guitarist/composers of his generation, Adam del Monte has made it his life mission to fully express himself in these two genres, transcending labeling and convention. Always having incorporated a wide array of musical styles in his compositions, Del Monte and has embarked on a journey creating a unique sound and language of flamenco that is both steeped in tradition and progressive in its openness to musical flavors from around the world.

Del Monte has recorded for Deutsche Gramophone – the featured flamenco guitar part in the double Grammy award winning opera Ainadamar by Osvaldo Golijov (2006), with soprano Dawn Upshaw and the Atlanta Symphony, conducted by Robert Spano.  Since then, he has toured this opera in, Carnegie Hall, NY, Lincoln Center, NY, Barbican Center, London, Colorado Music Festival in Boulder, Chicago Symphony and many more.

Del Monte was both influenced by and inspired the younger generation of flamenco performers who were beginning to depart from the previous virtual space of Spanish flamenco. Del Monte, too, set out in new directions, integrating years of traditional and leading–edge flamenco training as well as expanding his musicianship on the classical guitar. An eclectic awareness of jazz, world music and other contemporary forms led to new, creative renditions of flamenco repertoire.

First Prize Winner at the 1997 Stotsenberg International Classical Guitar Competition, Del Monte is one of the new generation’s dynamic forces in both flamenco and classical guitar. He studied flamenco and classical guitar in Spain, Israel & England. Beginning with his father, he continued his training with such famed Gypsy performers as Pepe Habichuel”, Paco Cortez, Nino Miguel &Gerardo Nunez. His classical guitar teachers were Menashe Baquiche, Israel and Gordon Crosskey at Chethams School of Music and at the Royal Northern College of Music, Manchester, England. He has also appeared as both a solo artist and group performer in major venues such as LA’s Mark Taper Forum and the Wilshire Theater; the Teatro Real and the Conde Duque in Madrid; Manuel de Falla Auditorium in Granada; New Mexico St Francis Auditorium in Santa Fe; the International Guitar Festival in Israel, GFA in St Louis,’96, La Jolla,’97 and Charleston, 99 GFA, Guitar Festival, the 500th anniversary of Columbus celebrations in Paris and Madrid.

Adam has been on the studio guitar department faculty at USC since 2000, where he teaches flamenco and classical guitar.

The BCGS is also happy to welcome Ria Modak to the Artist Series stage this evening to open Adam Del Monte’s performance. 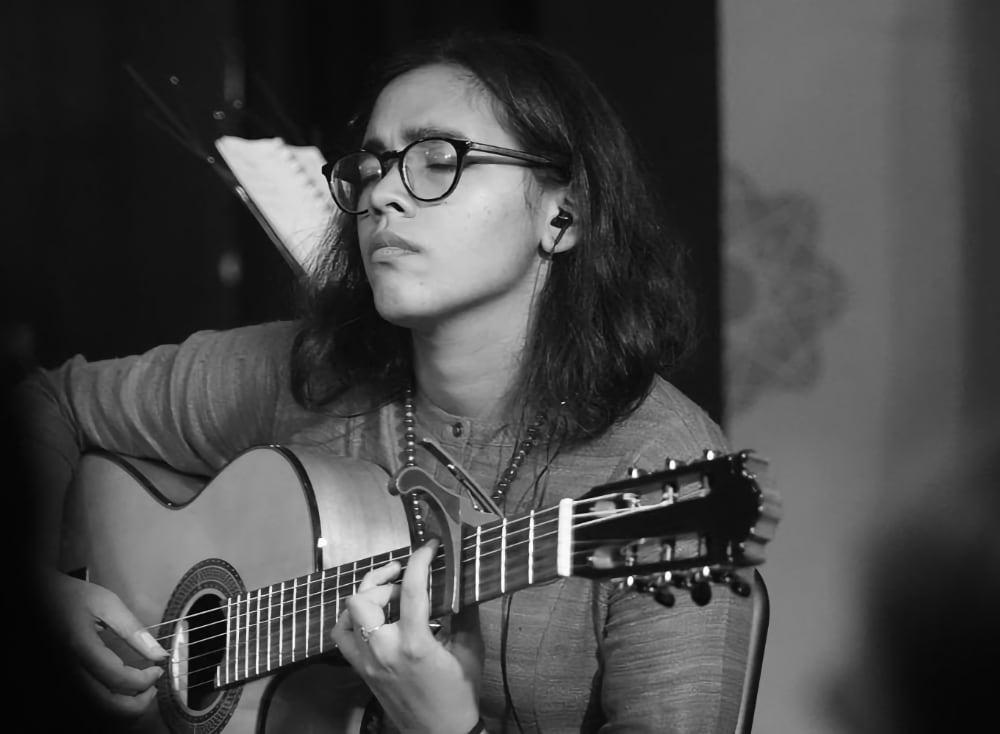 Ria Modak is a guitarist and composer from New York. She is pursuing a master’s degree in guitar performance at the New England Conservatory of Music, where she studies with Eliot Fisk, Jérôme Mouffe, and Grisha Goryachev, and recently graduated from Harvard College, where she studied with Vijay Iyer and Esperanza Spalding. Her playing has been recognized by the National YoungArts Foundation, the Long Island Classical Guitar Society, the New York Guitar Seminar, and Lincoln Center’s Chamber Music Society, and she appeared on NPR’s From The Top in 2018 and 2020. She has performed with Paquito D’Rivera, Ali Sethi, Claire Chase, Isheeta Chakrvarty and other musicians both in the United States and India at venues ranging from Weill Recital Hall at Carnegie Hall to the National Centre for the Performing Arts in Mumbai. As a composer, she is inspired by her training in Hindustani music and flamenco, and has been commissioned by the Harvard Office for the Arts, the Harvard Composers’ Association, the National Jazz Museum in Harlem, and Winter JazzFest as part of Jen Shyu and Sara Serpa’s M3 Fellowship.