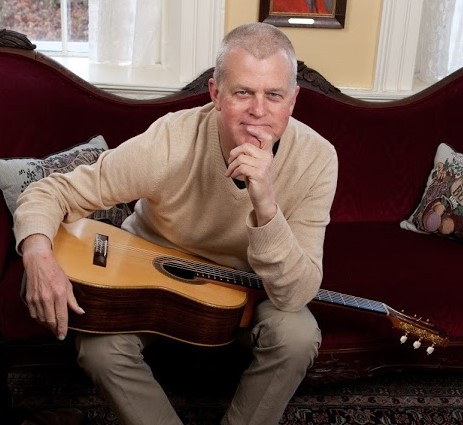 Known as a soloist and collaborative chamber music guitarist, Dave McLellan has been performing in U.S., South America, Great Britain, and Europe since 1976. He has appeared in major concert halls such as Carnegie Hall, Merkin Hall, and Wigmore Hall (London). After setting aside the music career for one in software engineering in 1981, he lived a double life as programmer and concert guitarist with duo partner Neil Anderson. The Anderson- McLellan Duo gave numerous concerts throughout the 1980’s, including two concert tours of Great Britain, performing also for festivals in the US and South America. Winning the 1987 Concerts Atlantique competition, they appeared in Geneva, Switzerland. Their farewell performance in November, 1989 in Merkin Hall, New York, was a program of American duo guitar music, supported by a grant from the National Endowment for the Arts and the D’Addario Foundation.

Throughout his career, he has performed with various chamber ensembles and singers across New England, including in recent years the Serata Quartet and soprano Rebecca Grimes (with whom he participated in the Symphonic Relief for Haitiworld-wide series of concerts to raise money for aid to earthquake ravaged Haiti in 2010). The 2012-2013 season brought his collaboration with soprano Rebekah Alexander for the ‘This is My Letter to the World’ series of concerts, and with guitarist/composer Frank Wallace. Contralto Emily Marvosh (Handel & Haydn Society, Lorelei) is a regular collaborator. An early collaboration with guitarist Edward Flower resulted in two full length recordings of duo guitar music for Music Minus One. In 2019 and 2020, he collaborated on a series of concerts called Heart on Fire – Music of the Americas and Dreams of Summer with flutist Tracy Kraus.

Mr. McLellan served on the faculties of The Hartt School and the University of Connecticut, where he also performed regularly with Edward Flower. He currently is on the faculty of the Performing Arts Center – Metrowest in Framingham, MA, and in the Town of Harvard Artist in Residence program. He directed a Renaissance-to-Rock garage band of teenagers at the Memorial Congregational Church in Sudbury, while at the same time developing skills as a free-lance timpanist and percussionist. He continues to play timpani with orchestras in the Metrowest Boston area. He is the timpanist, publicist, and guitar soloist of the Lincoln- Sudbury Civic Orchestra, in residence at Lincoln-Sudbury Regional High School.