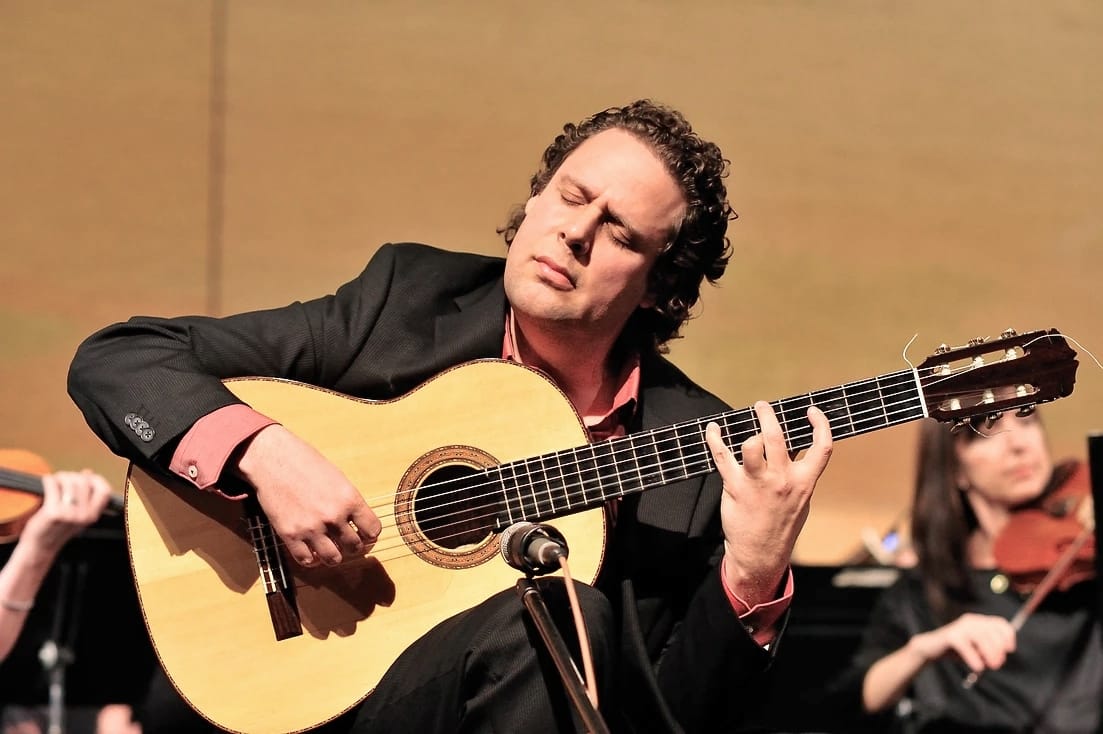 One of the leading flamenco and classical guitarists of his generation, Adam del Monte transcends labeling and convention as a performer and composer in both genres. In his virtual BCGS debut, Adam will perform selections from his repertoire and engage with us in an interactive conversation, sharing stories and secrets behind his great talent.

Adam del Monte has made it his life mission to fully express himself in both flamenco and classical genres, transcending labeling and convention. Always having incorporated a wide array of musical styles in his compositions, del Monte has embarked on a journey of creating a unique sound and language of flamenco that is both steeped in tradition and progressive in its openness to musical flavors from around the world.

Del Monte has recorded for Deutsche Gramophone – the featured flamenco guitar part in the double Grammy award-winning opera “Ainadamar” by Osvaldo Golijov (2006), with soprano Dawn Upshaw and the Atlanta Symphony, conducted by Robert Spano. Since then he has toured this opera in Carnegie Hall, NY, Lincoln Center, NY, Barbican Center, London, Colorado Music Festival, in Boulder, Chicago Symphony, and many more.

Del Monte has recently composed his second flamenco guitar concerto, “Paisajes”, which was debuted and commissioned by the St. Monica Symphony. He has since performed it with the Moscow State Symphony in Tchaikovsky Hall and the Simon Bolivar Symphony Orchestra, in Caracas, Venezuela.

He has also recorded “Avner’s Theme” by film composer John Williams for the soundtrack CD of the motion picture “Munich” by Steven Spielberg. Other film credits include featured participation in films such as “Knight and Day” with Tom Cruise and Cameron Diaz and “Mr. and Mrs. Smith” with Brad Pitt and Angelina Jolie, music by John Powell, and “Toy Story 3,” music by Randy Newman.

Del Monte has also performed with flamenco singer Enrique Morente and the Madrid Symphony Orchestra, as well as with Lole y Manuel. Del Monte was both influenced by and inspired the younger generation of flamenco performers who were beginning to depart from the previous virtual space of Spanish flamenco. Del Monte, too, set out in new directions, integrating years of traditional and leading-edge flamenco training as well as expanding his musicianship on the classical guitar. An eclectic awareness of jazz, world music, and other contemporary forms led to new, creative renditions of flamenco repertoire.

He has been commissioned by the LA Guitar Quartet to compose a ‘progressive’ flamenco piece entitled ‘Cambio de Aire’. He has collaborated with Yusef Lateef and the Atlanta Symphony at the National Black Arts Festival in Atlanta GA. His flamenco debut CD on the Spanish label Sonifolk (1998), entitled: “Viaje a Un Nuevo Mundo” (Journey to a New World) was most favorably reviewed by Spain’s most acclaimed flamenco critic Angel Alvarez Caballero as well as Miguel Mora of El Pais an Alfredo Grimaldos of El Mundo.

Other discographies include a Mel Bay Artist Video Series – a classical and flamenco recital, and a GSP classical CD entitled “EZORDIO”.

In 1998, Adam performed in Spain on the TV program “Algo Mas Que Flamenco” with Lole Montoya.

He has composed a flamenco guitar concerto “Ensueño Flamenco” for guitar and orchestra which he premiered in Boston with the BMOP (Boston Modern Orchestra Project) in Jordan Hall, conducted by Gil Rose. In 1999 he returned to Granada to perform in the oldest “Peña Flamenca” “La Plateria,” as well as a tour in Switzerland with singer Curro Fernandez.

Adam performed as soloist the Concierto de Aranjuez at Disney Hall several times. He has also performed the “Aranjuez” with the Pacific Symphony with Carl St. Claire. In 2005 del Monte took part in the Los Angeles Philharmonic Chamber Music Series at Disney Hall, performing the “Histoire du Tango” by Astor Piazzolla with violinist Mark Kashper. He was a member of the Falla Guitar Trio from 2007-2012 where he performed extensively all around the US.

In 2008 he performed his Flamenco Concerto and the Concierto de Aranjuez with the Ranana Symphonet, conducted by Nir Kabaretti.

First Prize Winner at the 1997 Stotsenberg International Classical Guitar Competition, del Monte is one of the new generations dynamic force in both flamenco and classical guitar. He studied flamenco and classical guitar in Spain, Israel and England. Beginning with his father, he continued his training with such famed Gypsy performers as Pepe “Habichuela,” Paco Cortez, Nino Miguel and Gerardo Nunez. His classical guitar teachers were Menashe Baquiche, Israel and Gordon Crosskey at Chethams School of Music and at the Royal Northern College of Music, Manchester, England. He has also appeared as both a solo artist and group performer in major venues such as LA’s Mark Taper Forum and the Wilshire Theater; the Teatro Real and the Conde Duque in Madrid; Manuel de Falla Auditorium in Granada; New Mexico St Francis Auditorium in Santa Fe; the International Guitar Festival in Israel, GFA in St Louis,’96, La Jolla ,’97 and Charleston, 99 GFA, Guitar Festival, the 500th anniversary of Columbus celebrations in Paris and Madrid.

Adam has been on the studio guitar department faculty at USC since 2000, where he teaches flamenco and classical guitar.