Season tickets are available!  Experience all of our amazing artists at discounted rates by selecting “BCGS 2012-13 Season Pass” in our online box office.

BERTA ROJAS is a fiery, virtuosic, yet elegant ambassador for the music of her native Paraguay and Latin America.  The music and grand spirit of the composer Augustín Barrios are deeply felt in her performances, but she is equally compelling in interpreting a gentle folksong or exuberant dance.  Having graced the stages of New York, London, Paris, and, and at the 2010 GFA Convention in Texas (where her artistry was mesmerizing), we are delighted to welcome Berta to Boston. 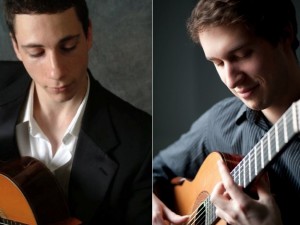 GRISHA GORYACHEV and JEROME MOUFFE are two young guitarists you absolutely must see and hear to believe.  Grisha’s almost-ridiculous technical wizardry and absolute command of the Flamenco genre have blown away audiences around the world.   Jerome embodies the virtues of the great age of the Romantic guitar: effortless virtuosity and dramatic emotions.  Grisha and Jerome will play both solos and duos.

DAVID RUSSELL certainly needs no introduction, though it will be his first concert in Boston in many years.  The legendary, GRAMMY award-winning guitarist has had a phenomenal performing and recording career and is reaching for new heights with his recent Baroque album. No matter the genre, David’s interpretations serve as references for all who wish to be more complete guitarists.  While each of us may have a favorite player, David occupies a unique position of universal respect and admiration among amateurs and professionals alike.  His concert will likely be the most sought-after guitar event in Boston for some time.

ANDREW YORK is an iconic composer and guitarist, celebrated for his tenure with the Los Angeles Guitar Quartet and works such as Sunburst.  Andrew’s compositional voice, synthesized from classical, popular, and jazz sources, is wholly American yet very much his own.   Combined with a wonderful understanding of the guitar’s capabilities and gifts, his performances are immersive and a joy to hear.  Along with an evening concert, Andrew will lend his GRAMMY-winning talents to coaching and conducting the Ensemble Festival participants through a newly commissioned piece.